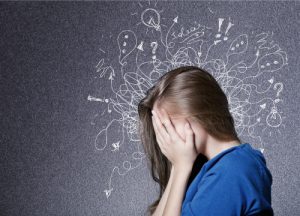 Many of our patients today suffer from chronic anxiety and nervousness. They also may be overly sensitive to quick movements or motions (perhaps they have to close their eyes during the roller coaster ad at the start of a movie), light, sounds, crowds, emotions, and other stimuli that overwhelm them. These patients often do not find effective health care because doctors don’t know what is causing their symptoms and thus how to treat them.

Did you know that 90 percent of the brain is there to inhibit the remaining 10 percent? The brain has two main filtering systems — one is called the basal ganglia and one is called the cerebellum. The brain constantly receives input and stimuli from our different receptors. We have visual receptors, smell receptors, taste receptors, receptors throughout the body, proprioceptors for motion and movement, and vestibular receptors in our inner ears to let us know where we are in space so we don’t fall over. All of these different receptors constantly fire into an area of the brain called the thalamus.

This constant input can easily overwhelm the brain if it didn’t have gating mechanisms in place.  If the brain is healthy and doing its job, the basal ganglia, a group of structures in the inner brain, filter this input. However, the basal ganglia is extremely sensitive to factors that cause brain inflammation. When brain inflammation is activated, it shut down the cellular mitochondria in the neurons so that they don’t function as well.

This hampers the ability of the basal ganglia to dampen input into the thalamus. As a result, they become overly sensitive to their environment. We see this with people after a brain injury — they can’t handle light or other stimuli, they have a restless mind, and overall they are less able to tolerate their environment. This can really shrink their world as they must remove themselves more and more from everyday activities.

There are different degrees of neuroinflammation. Some people can’t handle any stimulus and must spend most of their time in bed or quietly indoors. Others struggle with a restless mind, chronic anxiety, and an inability to fall asleep. However, the underlying mechanism can be the same for both.

The other pathway in the brain that filters input is called the cerebellum, located at the base of the skull. The cerebellum handles the constant stimulus from gravity and movement. As we move throughout the day, gravity’s effect on our muscles spindles and golgi tendons sends constant input into the cerebellum, which it must filter before sending it to the rest of the brain.

Like the basal ganglia, the cerebellum is also extremely sensitive to inflammation. Inflammation can dramatically compromise cerebellar function, making it difficult to handle motion (motion sickness is common with compromised cerebellar function), crowed places, light, and sound. The poor filtering of the cerebellum and excess input into the brain leads to increased anxiety, nervousness, and insomnia.

The reason many people have chronic insomnia, a restless mind, anxiety, and become easily overwhelmed is because their brain is inflamed. The basal ganglia and the cerebellum, which act as filters, are two of the more vulnerable areas to inflammation. When they are compromised by inflammation, they can’t do their jobs properly and the brain is always activated and cannot rest. These patients are desperate and try different anxiety medications and different things to impact the brain’s inhibitory GABA receptors. They may even resort to alcohol or drugs just to calm down their brain, but ultimately the underlying mechanism is inflammation.

I’ve been working with chronically ill patients for the past 20 years. I’ve seen many, many patients who have chronic anxiety, nervousness, and insomnia who really suffer from an underlying neuroinflammatory mechanism.

Treating these patients is much more complicated than simply taking some anti-inflammatory supplements or taking a probiotic. You have to work through all the different pathways that increase neuroinflammation in the brain in a step-by-step approach, using labs, diet history, and physical examination. Learning this will give you edge in genuinely helping patients who are suffering from an inability to shut down their minds and enjoy proper brain function.

Remember, the primary job of the brain is really to inhibit itself.

I hope to see you in my neuroinflammation course and in our lively Facebook group that is available to course members only. You will gain valuable information to help the patients suffering from chronic anxiety and sleep issues.

The most overlooked clinical factor in treating autoimmune disease
October 9, 2019

Why heavy metal chelation can worsen a patient’s health
October 9, 2019

How medicine – conventional and alternative – is failing autoimmune patients
October 9, 2019

Heartburn is a red flag for serious health risks
July 19, 2019

Probiotics are not the magic bullet we think they are
July 18, 2019

This site uses Akismet to reduce spam. Learn how your comment data is processed.

This website uses cookies to improve your experience while you navigate through the website. Out of these cookies, the cookies that are categorized as necessary are stored on your browser as they are essential for the working of basic functionalities of the website. We also use third-party cookies that help us analyze and understand how you use this website. These cookies will be stored in your browser only with your consent. You also have the option to opt-out of these cookies. But opting out of some of these cookies may have an effect on your browsing experience.
Necessary Always Enabled
Necessary cookies are absolutely essential for the website to function properly. This category only includes cookies that ensures basic functionalities and security features of the website. These cookies do not store any personal information.
Non-necessary
Any cookies that may not be particularly necessary for the website to function and is used specifically to collect user personal data via analytics, ads, other embedded contents are termed as non-necessary cookies. It is mandatory to procure user consent prior to running these cookies on your website.
SAVE & ACCEPT